Ariel Torres: With consistency and perseverance, you can achieve anything 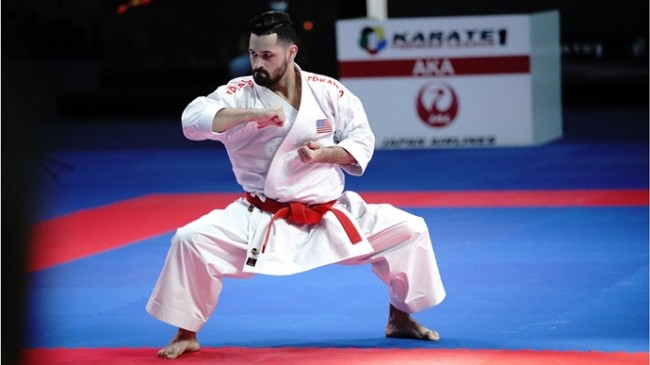 Ariel Torres: With consistency and perseverance, you can achieve anything

After winning the bronze medal at the Olympic Games, Ariel Torres of the United States continues honouring his amazing personal story in a perfect showcase of Karate Values. In Fujairah, he claimed the bronze medal in Male Kata.

“I am happy because with this medal I can keep my dream alive. It is an important step in the right direction. I just want to continue improving to show everyone, especially the US Olympic Committee that I can continue winning medals for my country,”, said Torres.

Previously, he had topped the preliminary pool with convincing victories over Yaroslav Fedorov of Ukraine and Mohammed Sayed Almosawi of Kuwait but failed to beat Enes Ozdemir of Turkey in the semi-finals.

“I feel that I still have a lot to improve. I know that I can do it better. But I am working hard, and I know that if I continue in this direction, more medals will come!”, he added.

Born in Cuba, Ariel Torres moved with his family to the US when he was four years old. He soon showed impressive skills for the sport, but the scarce resources of his family put his Karate future on the spot.

Luckily for him, the community in his hometown of Hialeah (Florida) stepped in. He received donations to be able to compete in Karate tournaments, and he performed katas in busy streets to ask passers-by for money.

“Everything I am, all that I have achieved, it is thanks to my community. I would go to richer communities, and I would receive no help from them. But my community, even though they had no money, they always supported me,” he said.

“My family, my community, my sensei, my partners, they are the ones who give me the energy,” Torres stated.

“WITH CONSISTENCY AND PERSEVERANCE YOU CAN ACHIEVE ANYTHING”

All efforts paid off for Torres. In Tokyo, at the Olympic debut of the sport, Torres won the Olympic bronze medal after defeating Karate legend Antonio Diaz of Venezuela in the celebrated bronze medal bout.

“With every medal I win, I can come back to my city and go to schools and tell kids my story. I can tell them that with consistency and perseverance, you can achieve anything,” said Torres.

The Olympian goes to local parks every other weekend to interact with children and advise them on the importance of practising sports. Sponsored by the local community and the local authorities of the city of Hialeah, this activity is one of the many examples of Torres’ efforts to spread Karate Values.